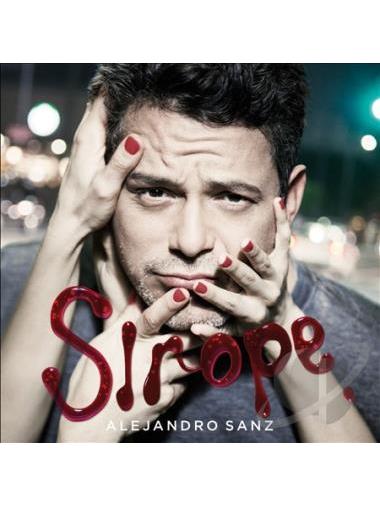 2015 album SIROPE van de Spaanse zanger Alejandro Sanz.
Decades into his career, Alejandro Sanz has experimented with such a dizzying array of styles it`s difficult to keep track of them. That said, his musical restlessness knows no bounds on Sirope. Over 13 tracks he delves into pop and folk traditions, stitching everything from funk and cumbia to rock, soul, and reggae -- and of course flamenco -- into sonic landscapes governed by his passionate Andalusian voice. His skill as a songwriter and arranger is balanced by his keen ear as a producer. Sanz demoed and charted everything in his home studio, bringing in co-producer Sebastián Krys (who mixed 2012`s La Música No Se Toca) when it was time to begin recording. Despite modern production, the set has a very analog sound. Everything from loops to strings were recorded and engineered with warmth and immediacy. No matter what else appears in this mix, acoustic guitars are as present as his voice. First single "Un Zombie a la Intemperie" is understandably a ballad -- it`s the man`s trademark, after all. But as he weaves together a lithe, romantic melody, it takes on cinematic scope because of its smart instrumentation. Nylon-string guitars and piano are adorned with dramatic strings, well-placed, subtle loops and ambient effects, shuffling snares, and a bumping bassline. "Un Zombie a la Intemperie" is in marked contrast with the steamy opener "A Mí No Me Importa," which weds reggae and cumbia with funky electric piano, horn vamps, dubwise bass, soaring souled-out female backing vocals, and a spiny electric guitar break. "Pero Tú" uses phrases from "Pachelbel`s Canon" in a frame of jazzy pop, modern soul, and Andalusian folk. One can hear traces of Wilson Pickett, Don Covay, and Julius Cheeks in the gritty, funky gospel rock of "La Guarida del Calor," with great breaks by drummer Pete Thomas and rumbling bass by Davey Faragher. That wild, unhinged gospel-infused R&B gets rubbed against hard-grooving nuevo flamenco on "Tú la Necesitas." "Todo Huela a Ti" is a breezy pop/rocker, with a shimmering beat and soul guitars. "La Vida Que Respira" is a breathtaking innovation on modern flamenco. Illustrated with tough loops and layers of acoustic and electric guitars, the bridge breaks with the form as a multi-voice chorus, strings, and an electric piano -- playing Afro-Latin montunos -- swoop in from the margins. "Suena la Pelota" is a glorious, uplifting duet with Juan Luis Guerra. It`s an uplifting paean to self-forgiveness and acceptance. It`s followed by the amazing midtempo ballad "A Que No Me Dejas," whose mariachi horn break is priceless. Initially, Sirope might be jarring for some listeners. Though polished, it contains no sheen. It is not a common exercise in pop fusion, but the vision of an artist who understands the roots of every style and tradition he employs. With Sirope, Sanz takes his fans further out onto his ledge than ever and rewards them abundantly for the journey. While refusing to compromise, he has -- again -- expanded Latin pop`s reach