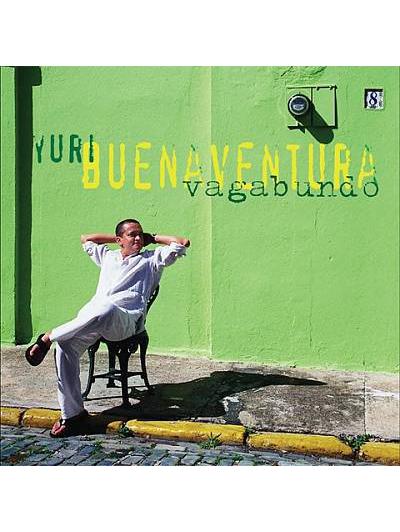 Yuri Buenaventura`s derde CD uit 2003 heet "Vagabundo" en is een veelzijdig album geworden.
It is far more than just another salsero. It`s part of his music -- just listen to the warm "Neruda," a salute to the great Chilean poet -- but he`s more a pan-Latin roots stylist who uses a lot of thought and intellect along with the passion in his music. There`s a strong streak of social consciousness running through his work, not only in the obvious, like "Terror," but also in "Donde Estarás?" a wonderful piece of Cuban son. In some ways he`s reminiscent of Rubén Blades -- they seem to have similar spirits and equal ambition for Latin music. To achieve that, he has some fabulously talented musicians working with him. But more than anything, it`s the breadth of his vision that`s astonishing. He can move easily from the Afro-Cuban "Afrotango" to the title cut with its lazy Parisian feel (it comes in both French and Spanish), and sound completely convincing on "Coqui" and "Paloma Taina," a pair of gorgeous odes to Puerto Rico. With his expressive, malleable voice and his easy command of so much Latin music, Buenaventura is a remarkable singer and writer.
1. El Guajiro Del Monte
2. Palo Y Cuero (duet con Cheo Feliciano)
3. Indiferencia
4. Mi America
5. Donde Estas?
6. Neruda
7. Hermanito
8. Vagabundo
9. Coqui
10. Paloma Taina
11. El Guerrero
12. Afrotango
13. Descarga Uno
14. Vagabundo (duet con Cheo Feliciano)
15. Terror
16. Descarga Dos