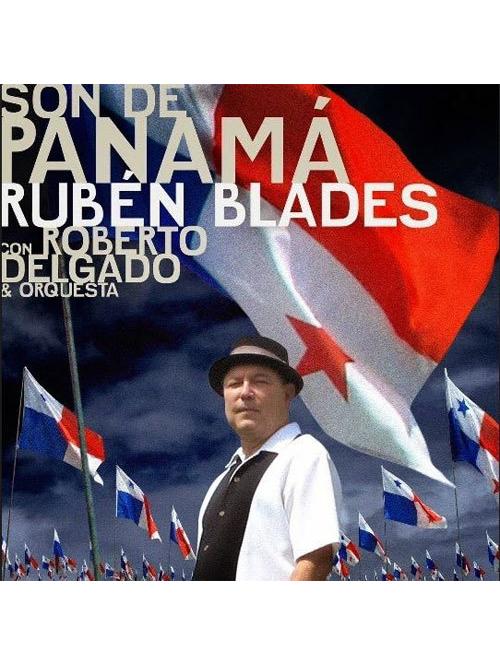 “Son de Panamá” has 13 songs, one of them (“La Caína”) repeated to allow for a Medoro Madera version (Rubén’s fictional sonero alter-ego). Of the 12 compositions, 5 are from other songwriters (4 Panamanian). The only non-Panamanian song is a re-make of “Me Recordarás” from Cuban Frank Dominguez, which Rubén Blades recorded with Willie Colón on their debut album “Metiendo Mano” (1977)
The music in “Son de Panamá” is superb. Roberto Delgado’s orchestra demonstrated why it’s considered one of the finest. For instance, the beautiful arrangements by the Panamanian bassist and bandleader, add a great melodic sound to the songs. Additionally, the orchestra has an instrumentation and versatility that can do it all!
At 66, Rubén Blades’ voice is still going strong, with the same wit he’s used in his soneos throughout his illustrious career in Latin
1. Las Calles (5:07)
2. Caín (4:18)
3. Ojos De Perro Azul (6:31)
4. Vino Añejo (5:30)
5. Parrhesia (4:42)
6. Me Recordarás (3:48)
7. Olaya (4:50)
8. La Caína (4:44)
9. Otra Canción De Amor (5:31)
10. En Esa Casa (4:07)
11. Teresa Batista (4:08)
12. El Perdón (5:22)
13. La Caína (con Medoro Madera) (4:43)
Mr. Blades mixes some of his old tunes (post Fania) - "La Caína" with a vibrant trumpet solo by Wichy López (this song appears twice, one version under Ruben`s alter ego Medoro Madera); "Ojos de perro azul" from the critically acclaimed but commercial flop Agua de luna. The original song felt like more of a personal note to the late Nobel prize winner Gabriel García Márquez (the entire CD is a tribute to Márquez). This new version with a full band gives it a wider global appeal. Excellent track!
There are songs from other panamanians (he did the same on 1996 La Rosa de los vientos - always trying to give shine to the talented musicians from Panamá), "Otra cancion de amor" by Rómulo Castro and "El perdón" by mega hit composer Omar Alfano, get a smooth romantic arrangement without sounding corny. The bolero "Me recordarás", written by Cuban Frank Domínguez, is the only track from the Fania days (he recorded this with Willie Colón on the 1977 classic Metiendo mano) and depending on your taste, Rubén is either an OK Bolero singer, or terrible.
But not everything is nostalgic. The poet still has a sharp pen and the new tunes are a testament to him always searching for new inspirations. "Cain" speaks of the famous story in the bible. Here the question becomes, "Is saying you`re sorry enough for redemption"? It`s one of the most agressive tracks on the CD. It will make you think and dance (Roberto Delgado`s orchestra swings hard as hell).
"Parrhesia" (a Greek word) pushes you to tell the truth, regardless of consequences. Here he touches on the USA`s hypocrisy of labeling Cuba a dictatorship but it`s ok to work with China`s dictatorship.
After so many recordings and compositions, you would think you`d have heard it all from Ruben, until you hear "En esa casa". This song will give you goose bumps as you listen to it. While many have recorded songs about domestic violence - from Los Van van to Reyli Barba - no one has touched on the aspect of silence and shame. Shame is something that impacts the abuser, the victim, the survivor and the witness. This connection is one of the main reasons folks don`t talk about it: they don`t want to bring shame to themselves, to the neighbor and the community. It`s time we start talking about this.
Mr. Blades has said, this is his last year recording, as he is going back to Panamá to run for the presidency once again. As salseros, we hope it`s not true but if it is, what a way to end it! (review SalsaPower)