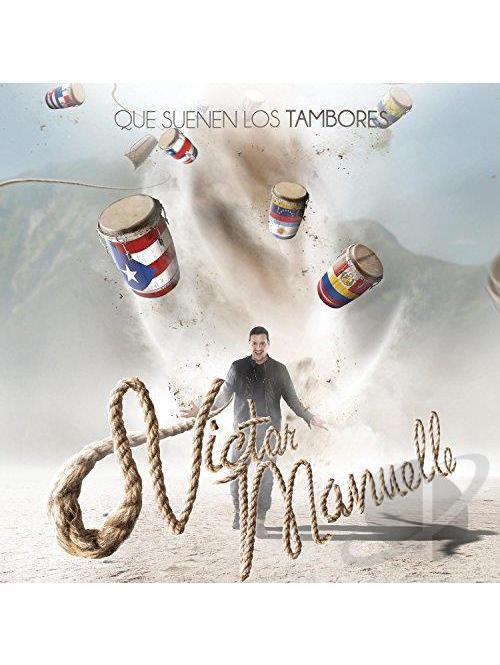 Que Suenen Los Tambores is een van Victor`s beste releases van de laatste jaren. Afwisselend salsa album met meedere hits, april 2015 release.
In Victor Manuelle’s “Que Suenen los Tambores”, the Salsa star mixes his signature Salsa Romantica with songs that take a social theme or incorporate other rhythms. The result is an engaging and well-produced Salsa album that I suggest is one if not the best album Victor Manuelle has released in his 20-year music career.
“Que Suenen los Tambores” is the 16th studio album of “El Sonero de la Juventud”, and his 20th overall recording. The album contains 13 songs (one is a 2nd version of Que Suenen los Tambores).
The album had 3 singles released ahead of the album launch:
“Que Suenen los Tambores” – 24th #1 Billboard Tropical Airplay (broke his own record).
“Agua Bendita” – reached #2 in Billboard’s Tropical Airplay chart.
“Algo le Pasa a mi Heroe” – a song about Alzheimer’s disease which touched Victor Manuelle very personally as his father has it.
The album has a mixture of songs styles, with some Salsa Romantica on the classic Victor Manuelle style, while other songs experiment with various rhythms.
For example, “Agua Bendita” opens with the Vallenato notes of an accordion. “La Vida Perfecta” evolves into a fusion of Salsa with other rhythms, but has a very particular (almost weird) arrangement once the “coros” start.
“Sal a Bailar” has tones of Calypso. …and “Isabela” works the hard Salsa (yes, you hear right…Salsa Dura!)
Mixture of Romantic themes with Social themes.
I mentioned the classic romantic themes, but it also has… Social messages, like in “Que Suenen los Tambores” and obviously “Algo le Pasa a Mi Heroe”
…and Victor Manuelle adds 2 of what I call “feel good” songs. You know, like Marc Anthony’s “Vivir la Vida”. This is a commercially successful stream that more and more artists are drinking from.
Victor Manuelle adds “Sal a Bailar” and “Que Suenen los Tambores” to this field.
3. My Favorite songs are…
“Algo le Pasa a Mi Heroe”, which is a nice ballad that addresses the Alzheimer’s disease.
“Isabela” is a great classic Salsa, a tribute to his home-town of Isabela, Puerto Rico. The song was recorded with trombones only in the winds, and reminds me the similar Ruben Blades song “Plaza Herrera” (check it out at the end of this blog) in the 1988 album “Antecedente”.
This is a well-produced album, with a careful balance of Salsa Romantica, Social messages, and a few different rhythms within the songs, and even a Salsa Dura song. “Que Suenen los Tambores” has plenty of good Salsa music for everyone! (review by Latino Music Cafe)