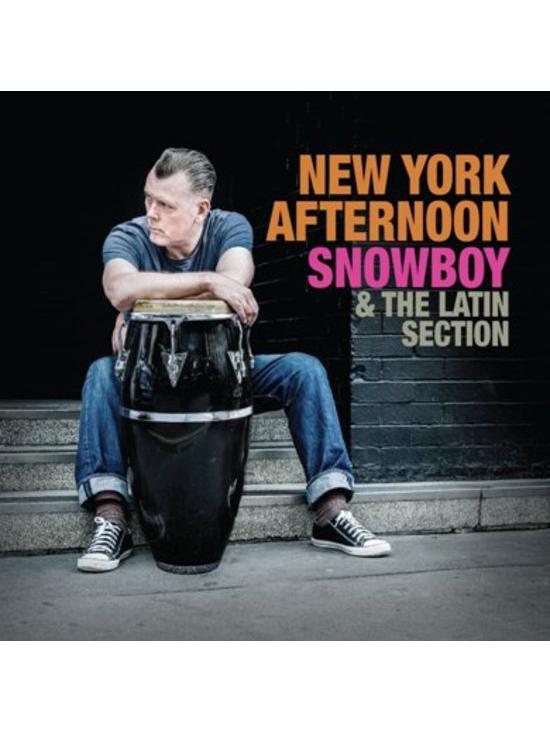 Snowboy is the leader of Europe’s leading Afro-Cuban Jazz group, Snowboy & The Latin Section, featuring the UK’s most exciting and pyrotechnical jazz and Latin players : Sid Gauld (Trumpet), Paul Taylor (Trombone), Neil Angilley (Hammond B3 and Fener Rhodes), Nico Gomez (Bass), Davide Giovannini (Drums, Timbales and Vocals) and Dave Pattman (Bongos). ‘New York Afternoon’ features every one of them as always. But that’s not all, Snowboy is also an in demand DJ and a regular at the likes of the South London Soul Train’s bi-monthly sessions.
New York Afternoon is classic Snowboy drawing on jazz dance classics, salsa and mambo in a dynamic new recording which captures the block party feel of 1970s Latin jazz and early salsa. The all-important trademark Snowboy mambo style is present with an authentic cover of the Edmundo Ros classic ‘Olé Mambo’ and the original ‘La Época Del Palladium’. The great influence of his mentor and friend, Eddie Palmieri, on the long, mean, dark and tense, ‘The Triple Bluff’ is there too. There is the epic and grandiose solo keyboard piece ‘Cala Escarpada’ by Neil Angilley and two heavy Salsa songs ‘Tres Tambores’ and ‘Echalo Ya’. The distinctive vocals of Davide Giovannini are prominent throughout the album.
The album also features some very special guests, including the legendary House music vocalist, Marc Evans, from Baltimore on the title track a cover of the legendary Richie Cole and Eddie Jefferson “Jazz Dance” classic ’New York Afternoon’. ‘Better’ and ‘Oxen Free’ feature, and are written by, the incredible Boston based jazz singer-songwriter Jen Kearney. The final guest is experimental saxophonist, Pete Wareham, from Acoustic Ladyland, Polar Bear and Melt Yourself Down. Snowboy’s long-time Saxophonist, Gary Plumley, was on sabbatical in India, so he asked Pete. Snowboy is a huge fan of his wild and uncompromising Free Jazz style and Wareham’s unique style certainly brings something different to the album.
Not only is this Snowboy’s 16th album, but after recording for over 30 years, New York Afternoon is his most unique and ambitious one yet.