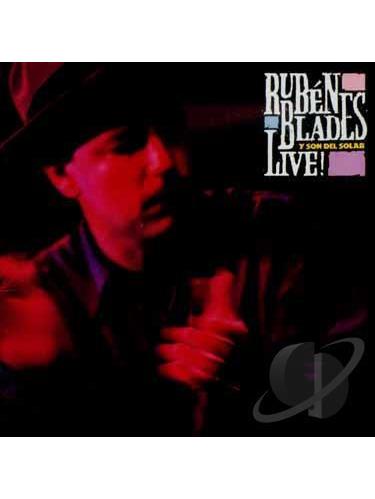 € 16,90
Bestellen Tell a friend
Rubén Blades y Son del Solar Live!
Classic live recording from 1989 from Ruben Blades (de Panama) y Son del Solar, with Oscar Hernandez (piano), Ralph Irizarry (timbales), Eddy Montalvo + Marc Quinones (congas) and Papo Vasquez (trombone). A dynamic performance, recorded in New York, with Son del Solar, one of the best bands of that period. A very lively recording for almost 75 minutes!. One of Blades best recordings of his career and one of the best salsa live albums of all-time.
1. Decisiones (6.01)
2. Cuentas Del Alma (6.53)
3. El Padre Antonio (8.46)
4. Pedro Navaja (9.27)
5. Todos Vuelven (5.54)
6. La Cancion Del Final Del Mundo (6.37)
7. Ojos De Perro Azul (7.24)
8. Buscando America (11.07)
9. Muevete (12.18)
This one`s simply a masterpiece by Rubén Blades and his Son del Solar band. Probably the most hooking and cheerful recording out from all his discography, capable of making the whole latin music to sound like the finest symphony.
The entire show record captured not only the feeling on the music, the virtue on the performance and Ruben`s catchy vocals, but it also captured faithfully the audience mood that night. There`s some passages that even sound like a comedy stand-up show, highlighting the communion between the artist and his fans.
Not a greatest hits collection, as not all of his best songs are included but, however, still one of his personal best, and perhaps also one of the best salsa albums recorded ever.
Even if you don`t speak Spanish, this is the best and most meaningful salsa music on the planet, hands down. The melodies and and rhythms are amazingly complex. After literally hundreds of listenings, it still moves my soul like no other music ever has. Also, at a full 74 minutes long, you definitely get your money`s worth in terms of length.