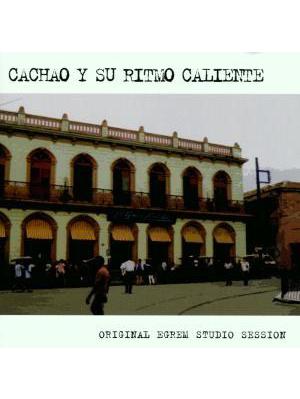 Cachao y Su Ritmo Caliente "Original Egrem Studio Session (Descargas): Dit zijn de klassieke originele Cuban Jam Sessions ("Descargas") uit 1957, volgens velen "the roots of modern salsa". Voor iedereen die wil weten hoe de salsa is ontstaan (+ Buena Vista Social Club), luister naar deze opnames.
Originele, nieuwe CD, uit voorraad leverbaar.
"The concept of the jam session (descarga) is nothing new to Cuban music. When good musicians get together they can always be called upon to be spontaneous and creative. This classic recording from 1957 showcases the father of modern tumbao (the repetitive bass lines in Cuban music), Cachao, with colleagues like `Barrettico` on timbales and Richard Egües on flute who have become folk heroes, as well as others improvising over basic themes. This album is a great introduction to the vocabulary of Cuban music and some of its legends. I have owned and listened to a large number of latin jazz recordings over the past many many years. Common to many enjoyed works by various artists in different musical forms, a lot of those recordings found less and less play time in my home. This is not to say that the music was bad, but rather that it just no longer struck that chord of interest in my ear to yield the freshness associated with the times that i first listened to it. As a result, many of my latin recordings, along with other genres, found themselves making the passage to the local used music bins. Not so with this recording!! Every single time that i pop it into my player, it bangs out vibrant and rich. The music is so simply and masterfully played, with such variance and beautiful flow, that i am basically struck dead by its power. If there is just one single latin jazz CD that you wish to have in your collection (who knows why that would be so!?), Then make it this one. You will not be disappointed.
1. Descarga Cubana (3:02)
2. Goza Mi Trompeta (2:58)
3. Cogele El Golpe (2:42)
4. Trombon Criollo (3:06)
5. Malalnga Amarilla (3:14)
6. Pamparana (2:33)
7. Oye Mi Tres Montuno (2:42)
8. Controversia En Metales (2:59)
9. A Gozar Timbero (2:59)
10. Sorpresa en Flauta (2:48)
11. Estudio en Trompetta (2:20)
12. Guajeo de Saxos (2:22)
(1957)