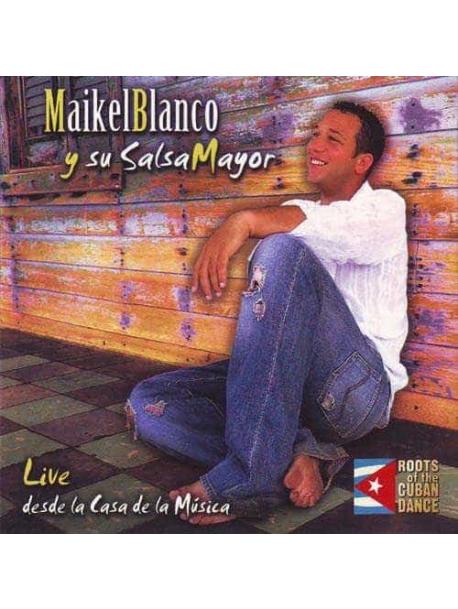 € 17,90
Bestellen Tell a friend
Maikel Blanco - Live, Desde La Casa de la Musica, 2007 release
Smoldering live timba performance by Maikel Blanco y Su Salsa Mayor. Blanco, who composed all of the tunes here, is quickly becoming the major timba star in Cuba. I can`t think of many *live* timba performances on CD, so this is something of a rarity. 73 minutes of jam-packed timba fire. With "La Masa," "Cambia Tu Faceta," "Lo Bello Por Dentro" (a whopping near 14 minutes worth), "Recoge Y Vete" and others.

As one of the most talented timberos to come out in recent years, Maikel keeps pushing the envelope with this energetic live timba show, yes I said live show and what a smoker.
The opening track is reminiscent of Charanga Habanera/Earth, Wind & Fire opening sequences which gives way to "La Masa", an unapologetic track that you`ll need a time out after dancing to this one. "Quitandome lo malo" stays at such a steady pace with this sticky group that you and your partner are going to look as if you are attached at the hips.
"Esto está", from his previous release gets a monster arrangement a Los Van van, with the trombones coming at you like a mad truck. I dare anyone to sit thru this one.
The studio versions of these songs pale in comparison to the energy and vitality this live recording has. Each track is extended showcasing the young and talented band. Unfortunately the CD does not come with a description of the musicians or singers and what a pity, because they deserve every accolade for this recording. The only misstep is the somewhat fake clapping by the audience but that`s easily forgotten with such an enigmatic performance. (review by Salsapower)
1. Opening
2. La masa
3. Quitandome lo malo
4. Esto esta
5. Potpourri: el veterano, la discordia de las frutas, si quieres, quiereme
6. Cambia tu faceta
7. Lo bello por dentro
8. Control
9. Recoge y vete
(2007)