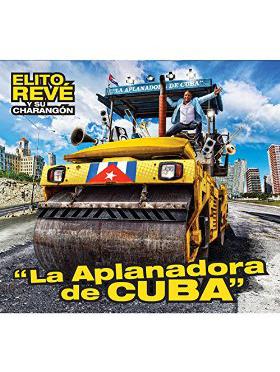 CD "LA APLANADORA DE CUBA" - ELITO REVÉ Y SU CHARANGÓN, 2014 release op BIS music, nu eindelijk in de originele persing, met enkele composities van Emilio Frias, die nu als El Nino Y La Verdad furore maakt.
One of the hardest things to mantain in Cuba is your number-one position in popular music. There are just too many talented and young groups, musicians, singers who are trying to be the next big thing. However, there`s one institution that keeps reinventing itself and it`s not just staying afloat, but slaying all newcomers and that is: Elito Revé y su Charangón.
- While musicians come and go (plenty of rumors throughout the years of how diffilcult Elito is), Revé always lands on his feet, and stronger each time. This release is no exception.
- Susel "La China" shows off her growth on, "No debo explicarte nada" and "Esa soy yo". These are anthems that are huge in Cuba and Perú. New singer, Moro with guest El Micha swings on the realistic and hilarious "Maricusa". Long time member Dagoberto is vocally solid on the great sing-along, "No me da la gana", which he also wrote.
- Then there`s returning vocalist, Lachy Fortuna. While he didn`t record with Revé, he was a staple in their live shows (similar to Michel Maza). This time around Lachy replaces a beast of a sonero, Emilio `El niño` Frías`. Apparently, all the songs Emilio was going to sing, Lachy re-recorded them (Frias still gets credit as composer) and as expected, that has created a bit of friction. Especially "El nombrecito", where Mr. Fortuna is on fire throwing jabs at what appears to be directed at `El Niño`. The song is a big hit in Cuba and it`s no suprise, that when Emilio Frías performs it, he makes sure the audience knows he wrote it.
- Say what you want about Elito, he`s ambitious and he`s going for it. This recording was intended as a double CD, but now the other volume will be released later on in the year. Until then, enjoy this smoking, swinging set, and be sure to get some rest, because as hot as this set is, just wait until you hear volume two: it`s a scorcher. (review by Salsapower)
1. LA APLANADORA DE CUBA (Aisar Hernández Segundo) (2:47)
2. NO DE MA LA GANA (Dagoberto Vázquez Valdés) (5:21)
3. ESA SOY YO CUBA (Aisar Hernández Segundo) (5:03)
4. EL JALA JALA (Rey Alonso y Cristian Alonso) (5:08)
5. EL NEGOCIO PERSONAL (Emilio Frías Peña) (5:35)
6. LA PASTILLITA (Aisar Hernández Segundo) (4:17)
7. EL NOMBRECITO (Emilio Frías Peña) (4:51)
8. NO DEBO EXPLICARTE NADA (Nelson Valdés y Wilfredo Naranjo) (5:17)
9. PISO 6: LO MÁS PEGAO (Elio Revé Duverger) (3:09)
10. MARICUSA (Elio Revé Duverger) (5:39)
11. TONY SIN MONEY (Dagoberto Vázquez Valdés) (3:40)