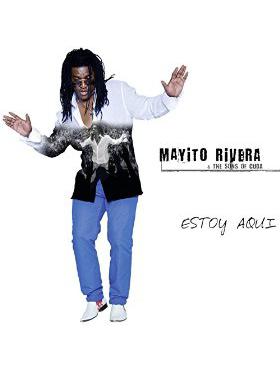 MAYITO RIVERA & Sons Of Cuba - Estoy Aqui
Mayito Rivera is working to become just like James Brown, the hardest working man in show business. With solo recordings plus Soneros de verdad, he has released over 5 CDs in the span of 3 years. And now we are blessed with one more.
Estoy aquí is the second CD with his band The Sons of Cuba. They are expanding from their previous release in 2014, "Invéntate una historia". Mixing elements of Son, Timba, Jazz, Pop and Soul. Usually when you have recordings with so much going on, you lose sight of the dancer, but not here! "Se matan", "Hacerte mía", "Fósforo", "Cada uno con su rumba" and title track are dance floor scorchers and we all know in terms of guapería, there`s no one like him.
However, it is the more subtle and subdued tunes that really make this something special. Listen to the exquisite piano work of Rolando Luna who spent many years with Mayito as part of Los Van Van, on "Cha cha chá termidor". El Poeta de la Rumba really showcases his vocals on "La malagueña", hitting some notes - I had to listen to it again to make sure it was him. "Rezo" written by the band`s bass player, Carlos Josué harks back to Irakere in terms of feel. The tempo changes and the prayer chants are purely orgasmic.
Together with Mayito, the sextet is growing in terms of sound, discipline and confidence. This is another great recording, in the trajectory of Mario Enrique "Mayito" Rivera Godínez. (review by SalsaPower)
1. Se matan (5:21)
2. Cada uno con su rumba (4:39)
3. Hacerte mía (5:06)
4. Fósforo (5:08)
5. Estoy aquí (5:23)
6. Cha cha chá termidor (4:03)
7. Rezo (3:23)
8. Pilón (3:54)
9. La propuesta (4:29)
10. La malagueña (5:30)