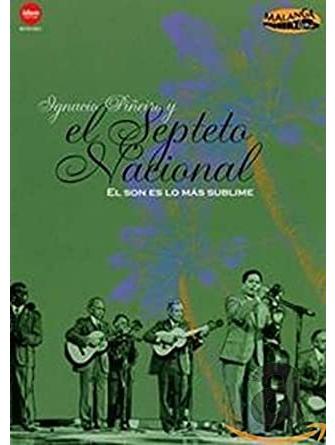 € 8,00
Bestellen Tell a friend
DVD Ignacio Pineiro-Septeto Nacional - El Son es lo mas Sublime
Wonderfully made documentary of the legendary Cuban band El Septeto Nacional with Ignacio Pineiro. Includes historical narrative, interviews with Dr. Maria Teresa Linares, Agustin Gutierrez, Pancho Amat, and Juan de Marcos Gonzalez, founder of the Buena Vista Social Club. Complete performances including "La Visa Es Una Semana," No Juegues Con Los Santos," El Final No LlegarÃ¡," and "El Eden De Los Roncos" which is performed by Carlos Embale and Coro Folklorico. And much more. Directed by Lleana Rodriguez Pelegrin.
Options include choice of English, Spanish or French, and comes with both NTSC and PAL versions.
This DVD will give you a bird`s-eye view into the golden age of the son, after its arrival to Havana in the 1920`s. The release also focuses on the early son septets - such as the agrupacion insignia, and the Septeto Nacional, directed by the prolific composer Ignacio Pineiro - the septet`s important influence today, and legendary figures like Carlos Embale, who developed their own interpretive style. If you consider the son to be the most sublime...don`t miss out on this rare opportunity.
subtitles English + Francais
side 1: PAL
side 2: NTSC