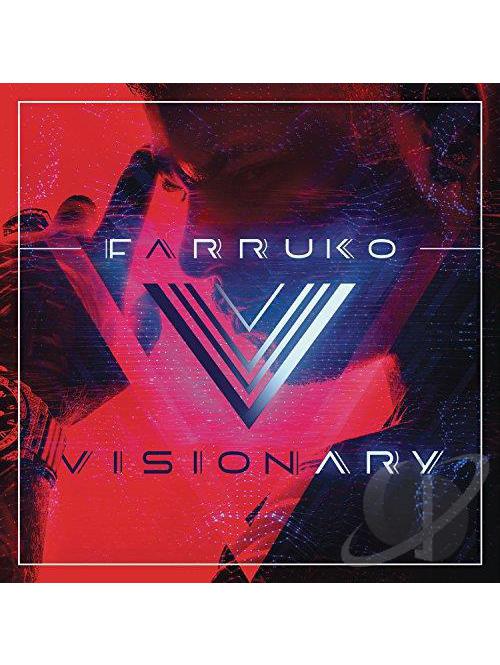 2015 album van het grootste reggaeton talent uit Puerto Rico. Op "Visionary" collabos met Nicky Jam. Shaggy, Pitbull en Ky-Mani Marley.
With Visionary, Farruko proves he has staying power. Los Menores, his 2014 album, debuted in the top spot on the Latin Albums chart upon release. His compilation tease for this date, The Ones, landed inside the Top Ten. Visionary was perhaps guaranteed a top seed based on the enduring success of its amazing hit single, "Sunset," featuring Shaggy and Nicky Jam, but it`s only one of many tracks here that offer listeners an aural view of Farruko`s stylistically inclusive brand of tropical futurism. The title track offers a spacy sci-fi intro; the reggae rhythms get stretched, spindled, and stacked while holding the groove. "Obsesionado" is smooth reggaeton with crunchy beats under a cool exterior. "HMB," with Messiah, weds Latin hip-hop to tropical soul, and offers killer marimba samples as another layer in the rhythmic frame. With its hardcore club attack, "Back to the Future" is titled in English but sung in Spanish. It showcases Farruko at his most inventive. The reggae-cum-soul groove in "Chillax" with Ky-Mani Marley is bilingual, with the latter`s gritty vocal riding a clipped snare and acoustic piano loops, accented with flanged reverb. The other English-language jam here is the anthemic "Never Let You Go" featuring Pit Bull. The latter`s sexy urban rap creatively references Kurt Cobain and Nirvana as well as Madonna`s Truth or Dare as metaphors for the bedroom while Farruko`s sweet, tender vocal comes up against a nylon-string flamenco guitar and driving house rhythm. In this number, the erotic meets the exotic. There are lighthearted cuts here too, such as the tender, soulful "Te Va a Doler" and the bittersweet "Intimidad." Farruko sends the set off strong as "Sunset" appears with its blend of sass, strut, and machismo just before the spooky, edgy, near apocalyptic "Angels" that closes the set. Farruko is firing on all cylinders on Visionary; he`s pushing new sounds, rhythms, and stylistic juxtapositions -- inside and outside pop, dance music, and hip-hop -- bringing them all under the umbrella of a new brand of reggaeton.