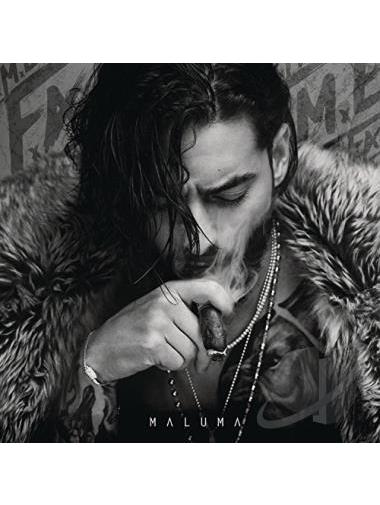 The shuffle of the reggaeton beat, unchanging across the entire genre, is a great example of how restriction can open up creativity – it’s effectively the world’s most successful oblique strategy. The beat underpins numerous tracks on the third album from Colombian megastar Maluma, and he skilfully aligns to its lulling, summery rhythm: the melodies to the big genre hits such as Corazón (1bn YouTube views and counting) and Hangover twine with serpentine litheness around that eternal drum pattern. La Ex is a slightly more muted, aquamarine version, with Jason Derulo turning up for some filthy feline metaphors, while Condena nicks the melodic logic of the Chainsmokers’ Closer. Maluma occasionally and ably stretches out into other styles, too: kush-wreathed R&B on How I Like It, and a cheesy but heartfelt acoustic ballad in Marinero.
As the squeaking bedsprings at the outset of Hangover loudly telegraph, he fancies himself a ladies man – or maybe just fancies himself, peppering the tracks with shoutouts to, er, Maluma, plus “mwah” kissy noises that could well be directed at himself in a mirror. Well, if you had his outrageous good looks, you probably would too, and combined with his vocals he makes an extremely convincing flirt. If, like me, your Spanish extends to a mangled “dos cervezas”, the language barrier doesn’t matter, and even perhaps heightens the experience – the chief strength of this well-written album is the sensuality in Maluma’s delivery, all keening vowels that splinter into come-hither huskiness. (review by Guardian, 18-05-2018)