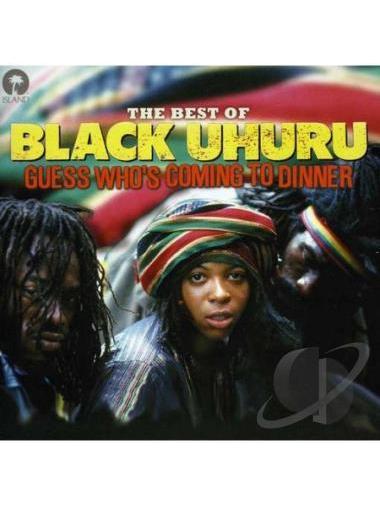 GUESS WHO"S COMING TO DINNER/Best Of Black Uhuru.
2012 collection from the Reggae greats. In the wake of Bob Marley`s passing in 1981, harmony trio Black Uhuru became the undisputed leaders of Roots Reggae in Jamaica and beyond. Originally formed by Derrick `Duckie` Simpson in the early `70s, it was not until the group`s collaborations with Riddim Twins, Sly & Robbie, that their music finally received international acclaim. Although their Island singles proved a little too strident for non-Jamaican chart action, the group`s albums attracted widespread acclaim, with the Anthem collection winning a Grammy for the best Reggae album of 1985. Guess Who`s Coming To Dinner brings together Black Uhuru`s most important works for Island, along with their two UK chart hits, `What Is Life` and `The Great Train Robbery`, culminating in the most essential single CD set of their work ever compiled. 16 tracks, 78 minutes playing time