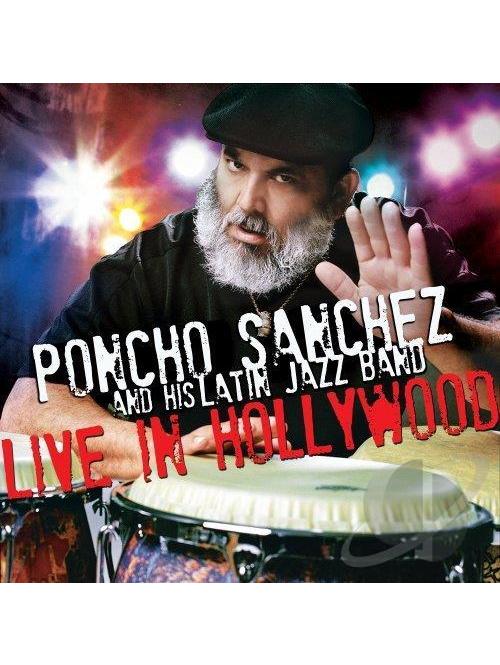 Fantastische Live In Hollywood opname van latin-jazz grootheid/conguero PONCHO SANCHEZ and his Latin Jazz Band.
It`s difficult to believe that in 1982, bandleader and conguero Poncho Sanchez signed a one-year record deal with Concord Picante, because 30 years later, he is still with the label. Who does that anymore? To celebrate that mighty anniversary, Sanchez and his Latin Jazz Band cut this smokin` slab in a single show at the Hollywood & Highland Summer Concert series in July. Beginning with the hard-swinging "Promenade" by music director and arranger Francisco Torres, the set moves into the glorious 12-plus-minute "Pancho Sanchez Medley," comprised of the tunes "Mi Negra," "Baila Baila," and "Bien Sabroso," and featuring stellar solos by tenor saxophonist Rob Hardt, trumpeter Ron Francis Blake, and, of course, the conguero himself. Another medley combines Mario Bauzá`s classic "Mambo Inn" with jazz standard "Green Dolphin Street." Here Sanchez reminds the audience what Machito and Tito Puente showed the world decades before: that Latin jazz at its best encompasses all forms of music within its universe. This is further underscored by the performance of R.G. Ford`s "Crosscut Saw," with guest vocals by George Dez (who also plays guitar on the tune). Here the blues meets boogaloo inseparably. Sanchez also pays tribute to his friend and mentor Claire Fischer as he introduces the late pianist`s "Morning." The performance of "Afro Blue" here -- written by Mongo Santamaría, another influence and mentor -- is among the tightest Sanchez has ever performed in a live setting. Hardt`s piccolo flute solo grounds the tune`s Afro-Cuban roots in Caribbean folk. But Sanchez saves the best for last in a nine-minute reading of the Anglero brothers` salsa "Son Son Charari." By the end of this 55-minute set, it becomes obvious that Sanchez had a couple of strategies at work here: paying tribute to his mentors and to the city of Los Angeles itself (he was born in Texas, but raised in Norwalk in L.A. County). What`s also readily apparent is that Torres wrote tighter arrangements for most of these tunes, some of which Sanchez had never recorded in a concert setting. Live in Hollywood reflects not only a grand anniversary, but the dizzying ability of Sanchez`s Latin Jazz Band to play anything it wishes with consummate swing and soul.