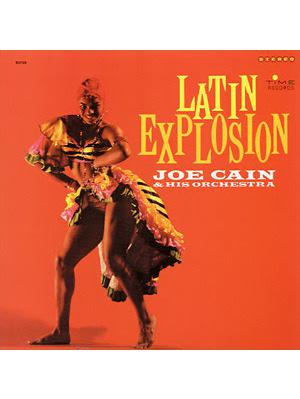 One of the few albums ever issued (1964) as a leader by the great Joe Cain – a wonderful Latin arranger with a really mad ear for a groove! Cain`s approach is often quite choppy in the rhythms – short, hard, and very very sharp – then topped with sweeter, jazzier lines – played on this set by Clark Terry on trumpet, Jerome Richardson on tenor and flute, and Frank Anderson on piano and some especially nice organ lines! Percussion is super-heavy throughout – played by Jose Mangual, Chocolate, and Marcelino Valdes with a vibe that`s just right for the rhythms – and additional support is from Cachao on bass and Herbie Lovelle on drums. The grooves are incredible – quite different than anything else on Mainstream Records at the time, and even different than most of the New York scene – and titles include the amazing "It`s A Mad Mad Mad Mambo (parts 1 & 2) (also known elsewhere as "Mambo Au Go Go") – a cut that sounds like some sort of crazy avant garde percussion banging, all made to keep in time to a mambo beat, with jazzy organ solos over the top.
Big all star line up for this monster latin jazz session produced, arranged and conducted by Joe Cain.Raw as hell with the energy crackling from the wax this is one of the really great latin lps of the 60s.Mambo Stomp,Wobble,Afro Montuno,Mad Mambo...it`s all here and its all good. From the incredible Rhumba Jazz of "Que Paso" to the storming Afro-Mambo "Kenyatta" this album will slay you from start to finish.
Side A:
A1. Tanga Pa Katanga (afro-montuno)
A2. Chunga Uhuruh Chunga (mambo-pachanga)
A3. A Bailar Guajira (guajira)
A4, Wild Horses (mambo stomp)
A5. It`s A Mad Mad Mad Mad Mambo Part I (mad mambo)
A6. It`s A Mad Mad Mad Mad Mambo Part II (mad mambo)
Side B:
B1. Que Paso (rhumba jazz)
B2. Pa-Pa Bajo (cha-cha)
B3. Listen Dos Trompetas (mambo jazz)
B4. Kenyatta (afro-mambo)
B5. Rio Muni (bolero-montuno)
B6. Mungo Mungo Baby (wobble)