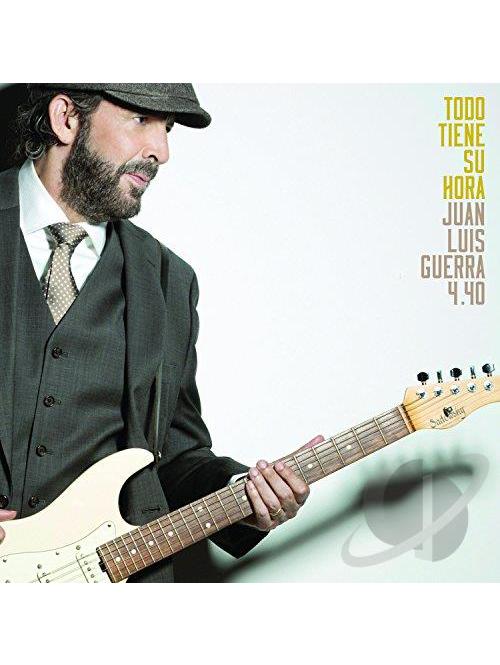 For more than 30 years, Juan Luis Guerra has worked diligently and stubbornly as a singer, songwriter, and performer to carve out new terrain for bachata and merengue in the Latin pop landscape. He is not a purist, but loves tradition. As such he has remained extremely adventurous, exploring many Caribbean and Latin forms, from salsa and son to cumbia. Nowhere is that more evident than on Todos Tiene Su Hora. Over ten songs, he and his killer 440 outfit range through all of these styles while integrating more musical forms. With its colorful horn chart, opener "Cookies and Cream" gently touches on the vintage R&B-inflected sounds of Louis Jordan, Creed Taylor`s expansively arranged jazz color palette on CTI, and vintage Dominican mini jazz with fantastically syncopated rhythms. The set`s chart-topping single "Tus Besos" is rooted in late-`50s/early-`60s doo wop siphoned through pop bachata. Its layered vocal harmonies and falsettos reveal just how deeply Latin and Anglo sounds are influenced by one another. Its melody is irresistible, caressed by claves, congas, sparkling electric guitars, and a strolling bassline. The interplay of voices in five-part harmony, from baritone to glorious falsetto, is as sophisticated as it is catchy. There is real soul in this tender, infectious love song. The seamless integration with cumbia on "Canto a Colombia" actually recalls the literary pop jazz of early Michael Franks in some of its vocal and musical strategies, as well as Dominican sounds -- it works effortlessly. "Dime Nora Mía" is a lithe, amorous, New York-style salsa, a real gem in the form and an album highlight. "Para Que Sepas" is a deeply moving son illustrated uncharacteristically by a clarinet adding a second "voice." The American string quartet Attacca adds swirling strings to highlight the drama in the passionate narrative. One of the loveliest bachatas here is "Muchachita Linda," written for Guerra`s daughter. Its horn arrangement contains a lovely inspirational (yet almost imperceptible) nod to the Beatles` "Penny Lane."." El Capitán" is a popping merengue, with bubbling basslines and sparking keyboards under Guerra`s voice entwined with a backing chorus`. "De Moca a Paris" is a burning merengue delivered in duet with the legendary Johnny Ventura. It`s the story of a sizzling romance between lovers separated by the distance of continents: He in the DR; she in France. The great Dominican composer Luis Dias is brought up as a way of addressing a longing that is "beyond Debussy." Nothing expresses desire like a cooking dance tune, and this one oozes with it. Todos Tiene Su Hora is utterly consistent as well as adventurous; it ranks easily with some of Guerra`s finest recordings and reveals that even after 30 years, he is able to break new ground while remaining accessible to his longtime fans.