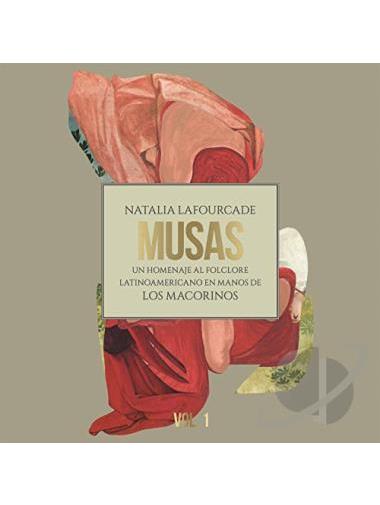 Musas: Un Homenaje  Al Folclore Latinoamericano En Manos de Los Macorinos is een prachtig, akoestisch album van de Mexicaanse zangeres Natalia Lafourcade. Het had zoveel succes dat er in februari 2018 een Musas volume 2 werd uitgebracht.
Over the past decade, Natalia Lafourcade appears to have found her groove, alternating between new albums of original material and projects that allow her to investigate other avenues; in particular, the rich heritage of Mexican and Latin American song. In this respect, Musas may initially seem like a sequel to Mujer Divina, her 2012 tribute to Agustín Lara, but a closer analysis exposes several telling differences between records. With Mujer Divina, Lafourcade was translating Lara`s work into her pop idiom in the company of several Latin rock and pop stars. Musas, on the other hand, is neither dedicated to a single composer nor a duets album. Most of all, instead of bringing old songs to the present, Lafourcade herself is now traveling back in time to fully immerse in traditional sounds and genres. Finally, rather than celebrate a famous past composer, this project was born from Lafourcade`s desire to work with Los Macorinos, the exquisite guitar duo formed by Juan Carlos Allende and Miguel Peña, who famously used to accompany Chavela Vargas, among many others artists. Even if Musas features several other notable collaborators (Gustavo Guerrero, Martín Bruhn, Ximena Sariñana, Juan Manuel Torreblanca, Héctor Castillo, David Aguilar, and Cheche Alara, not to mention a duet with the great Omara Portuondo), los Macorinos remain the heart and soul of this record, together of course with Lafourcade`s voice: she has rarely sung better. As for the repertoire, Lafourcade tackles songs by Lara (again!) and Roberto Cantoral, but also extends her vision beyond Mexico to cover Frank Domínguez (Cuba), Violeta Parra (Chile), and Simón Díaz (Venezuela), gently navigating across 50 years or more of Latin American folk music. Unsurprisingly, Musas is a delight from start to finish. Lost in the album`s elegance and breeziness, however, the casual listener may miss what is truly impressive about this work. Lafourcade is not merely revisiting the Great Latin American Songbook here: she is measuring herself against it. Musas includes five Lafourcade originals written in the same spirit as the songs by the celebrated composers mentioned above, and -- unless one cheats by looking at the credits -- it is virtually impossible to tell them apart from their noble predecessors. Self-penned opener "Tú Si Sabes Quererme," a son jarocho made in 2016 and graced by a sublime performance by Lafourcade and the always-impeccable los Macorinos, is easily the most beautiful song on this lovely record and an automatic contender for Latin track of the year.