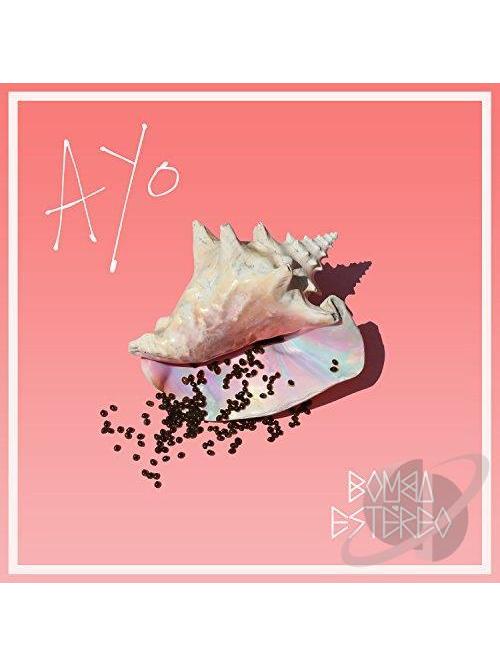 Aan de weg timmerende crossover Colombiaanse latin/world/dance act met hun 2017 album "Ayo"
Following a hit record is always tough. Bomba Estereo`s 2015 Sony debut Amanecer landed on the Latin Albums and World Music charts, netted two smash singles in "Soy Yo" and the remix of "Fiesta" featuring Will Smith, and earned a Grammy nomination for Best Latin Rock, Urban or Alternative Album.
Rather than try to replicate that success, Bomba make a left turn on Ayo. The album embraces the technological possibility of the dancefloor dominance of Amanecer, but nods back to the adventurous musical and songwriting aesthetics of 2012`s Elegancia Tropical, all while moving forward. The songs offer an album-length look at personal empowerment that embraces the totality of human experience, from pain to pleasure, from living in community to solitude, from anger to joy. It also looks deeply at nature and its cycles, and how it informs our lives. This is all accomplished by utilizing and mixing and matching musical styles from champeta and reggaeton to cumbia, reggae, and hip-hop. Multi-instrumentalist Meija is a wizard of arrangement and textures.
Opener "Siembra" offers backmasked, dreamy, psychedelic electronic pop before rumbling tambura drums and analog synths usher in a glorious folk-like melody and poignant lyrics as a sweeping anthem to personal empowerment and responsibility; a chorus of children`s voices and the use of the gaita underscore them: "Sow the sun in the morning/The road that calls you/Screaming at you from within/And that shows where to go/Loose/What is no longer in your time/What you no longer own/What you were waiting for...." "Quimca (Dance with Me)" features Balkan Beatbox in a club groover, but its minimal production, crunchy loops, and the stinging guitars behind Liliana Saumet`s half-sung/half-rapped lyrics are especially striking. "Duele" is a sultry cumbia about rejection and heartbreak; its use of flauta de millo as an illustration of vulnerability amid off-kilter synths in minor-key modes opens a space for Saumet to emote her pain cleanly above the mix. In "Internacionales," champeta, cumbia, and Afro-funk rub up against one another on the dancefloor as Saumet delivers a lyric that urges us to embrace experiences physical, spiritual, and emotional. Its psychedelic bridge offers space and lushness as the melody turns in and then breaks free. "Flower Power" turns the misogyny in reggaeton on its head; Saumet calls on women to refuse objectification militantly: "It`s time to scream, start singing/And stop saying `I`m sorry`...I will flourish and not disappear...." It gives way to the full of reggae of "Taganga," a love song whose lyric poetry equates the protagonist as a descendent of the sun, the sand, and the sea. Closer "Vuelve" revisits elements of "Siembre" in out, dreamy, psychedelic dubby form with looped flutes and soaring violin. Ayo puts Bomba Estereo`s depth on display, not only musically, but lyrically, technologically, and aesthetically. This is an album simultaneously created for the dancehall of the human heart as well as the body.