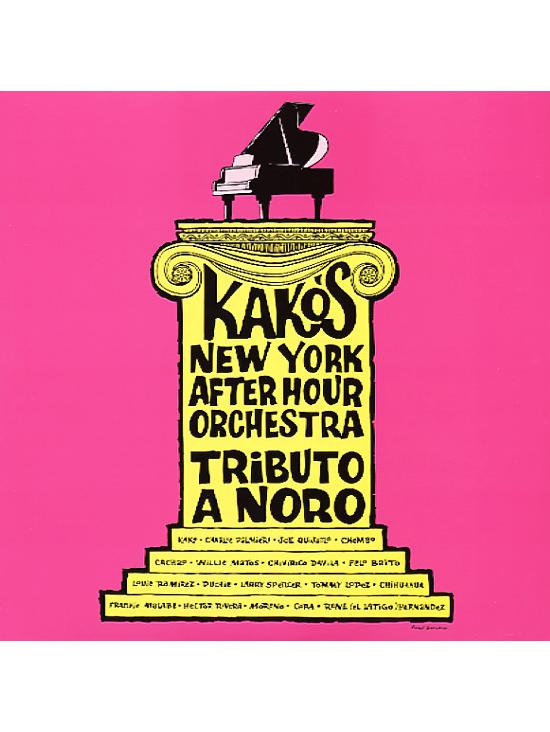 An amazing album that`s one of the greatest-ever descarga sessions to come out of the New York scene! The album`s supposedly a tribute to pianist Noro Morales – but it`s got a fire and energy that goes way beyond even Morales` best work, one that has the group recording in a long-format approach that was very different, and much harder-jamming than any of Morales` recordings from the 50s. The tracks are mostly Morales originals, but you`d hardly recognize them in the way the band takes off from their simple structure – using the room of the full recording to groove hard on the album`s best long tracks – "Mi Guajira", "Ponce", and "Vitamina" – all of which are the kind of Latin jammers you buy reissues like this for! Players include Louie Ramirez, Charlie Palmieri, Cachao, and Hector Rivera, Joe Quijano, Chivirico Davila, Felo Brito.
In 1965, Kako organized an 18-piece "after hours orchestra", which was virtually the Alegre All-Stars, for Tributo A Noro, a tribute to his personal friend Noro Morales, who had died the year before. This involved Al Santiago, Charlie Palmieri and Hector Rivera "kidnapping" musicians after the dances had finished and transporting them to the studio for a session beginning at 5 am. In addition to Kako, Charlie and Hector, the recording involved Israel "Cachao" López (bass), José "Chombo" Silva (tenor saxophone), Louie Ramirez (vibes), Joe Quijano (bongo), Chivirico (vocals) and Osvaldo "Chi Hua Hua" Martinez (güiro/gourd scraper).--
Side A:
1. MI GUAJIRA - Guajira (8:50) canta : Chivirico Davila
2. PERFUME DE GARDENIA - Bolero (3:24) canta : Felo y Chivirico
3. DESVELO DE AMOR - Bolero (3:44)
Side B:
1. MALDITOS CELOS - Bolero (6:14) canta : Felo Brito
2. VITAMINA - Descarga  (6:10)
3. PONCE - Descarga  (6:14)