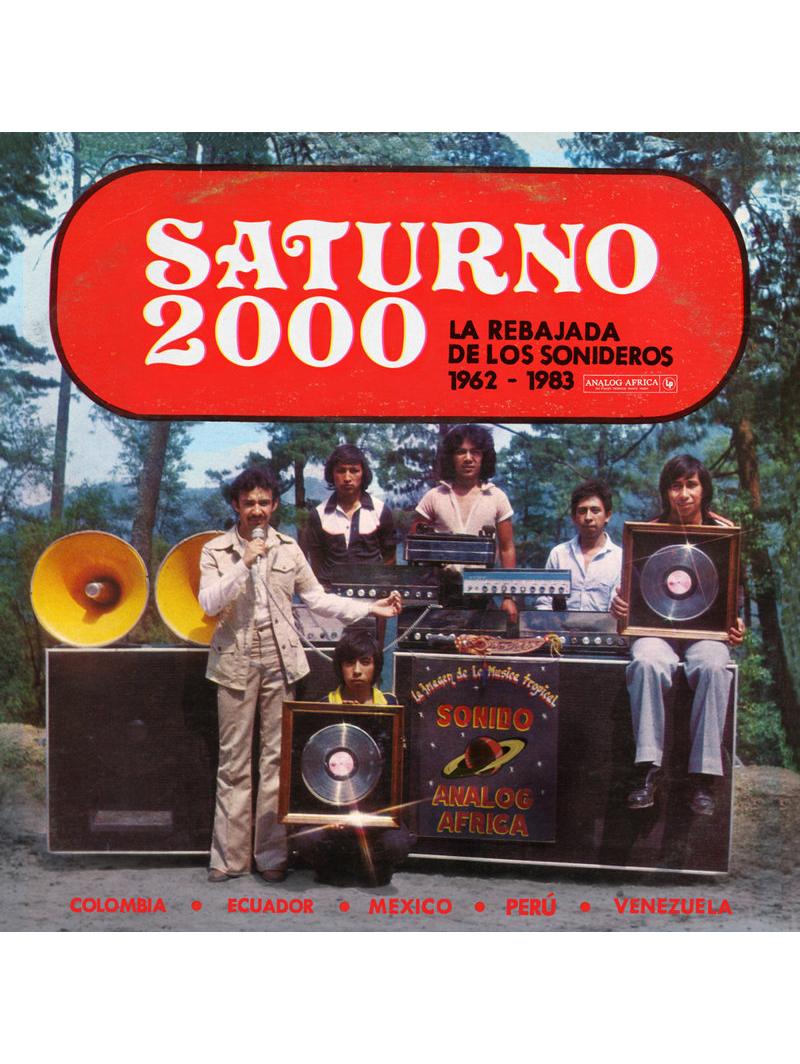 € 35,00
Bestellen Tell a friend
Saturno 2000 - La Rebajada De Los Sonideros 1962?-?1983
After 12 years in the making, Analog Africa finally announce the release of “Saturno 2000”, the 34th compilation in their regular serie. For this particular project they’ve delved deep into the scene of the Mexican’s sonideros to present the “Rebajada” movement they’ve created using locally made pitch controls, speakers and sound effects.
It is based around `Rebajada`, which is essentially a slowed down Cumbia which creates a much more tangible music to dance to. Slowed down music allows you enough time to hear right through it, revealing itself in ways rarely experienced before. Everything becomes more transparent and one can notice sounds normally only perceptible by bats. A near psychedelic experience.
Saturno 2000 - La Rebajada de Los Sonideros 1962?-?1983
Gatefold 2-LP with full color 12-pages booklet
A1. Los Dinners - Sampuesana (3:52)
A2. Junior Y Su Equipo - La Borrachita (2:30)
A3. Manzanita - Paga La Cuenta Sinverguenza (4:57)
A4. Hugo Blanco Y Su Arpa Viajera - Infinito (3:34)
B1. Manzanita y su Conjunto - El Jardinero
B2. Los Feos - Feito Parrandero (3:40)
B3. Junior Y Su Equipo - Bien Bailadito (4:14)
B4. Los Santos - Saturno 2000 (3:42)
C1. Lucho Gavilanes - La Danza Del Mono (3:21)
C2. Conjunto Típico Contreras - Capricho Egipcio (3:28)
C3. Los Gatos Blancos - El Chacarero (3:22)
C4. Los Atomos de Paramonga - Pa` Oriente Me Voy (4:25)
D1. Junior Y Su Equipo - Alegrate (3:00)
D2. Grupo Celeste - Todo Lo Tengo De Ti Menos Tu Amor (4:47)
D3. Los Ecos - La Fuga Del Bandido (5:01)
It all started in 2010. I had asked Eamon Ore-Giron - aka DJ Lengua - if he would be interested in compiling a Latin project for Analog Africa, and if so, if he had a theme in mind. He replied, "Have you ever heard of Rebajada?" The question mark above my head, together with the wall of China, must have been the only other object visible from out of space because Eamon, probably noticing I got paralysed, continued, "Rebajada in Spanish means "to reduce, lowered". It`s basically Mexican sonideros (sound-system operators) slowing down the beat of a Cumbia to create a much more tangible music to dance to. I`ll send you a mix I made last year and let me know what you think." And so he did.
That mix was called Rebajada Mota Mix and I began listening to it on a loop. Although I was not immediately hooked it was intriguing from the get-go, and so I kept listening until magic began unfolding. Slowed down music allows you enough time to hear right through it, revealing itself in ways I had rarely experienced before. Everything became more transparent and I was noticing sounds normally only perceptible by bats. A near psychedelic experience. That mysterious mix included a few Ecuadorian songs by Junior y su Equipo - aka Polibio Mayorga (a cult figure in the sonidero scene), a couple of Mexican tunes, one Colombian, and various Peruvian songs, undoubtedly the driving force behind this project.
The sonidero who brought Peruvian and Ecuadorian music to Mexico was the legendary Pablo Perea from Sonido Arco-Iris, and although his fingerprints are all over the compilation Saturno 2000, this selection of songs in rebajada is exclusive to DJ Lengua. With the exception of a few classics from Polibio Mayorga and La Sampuesana – the queen of all rebajadas – most of these songs were probably never performed as such before, let alone released.
So how did rebajada come to be? In a nutshell; Rebajada started with two families of brothers – the Pereas and the Ortegas – who travelled all over Latin America and returned to Mexico with heavy loads of records which they would sell to the various sonideros always on the lookout for new tunes. Colombian beats especially seemed to fit almost perfectly with the Mexican dance steps – but they were just a bit too fast. As a result some sonideros began experimenting with equipment, and Marco Antonio Cedillo of Sonido Imperial created a revolutionary pitching system that could slow records down to an extent other players could only dream about. And so rebajada was born... or so we thought.
At the same time in north of the country, in Monterrey, sonidero Gabriel Dueñez almost got electrocuted by a short circuit that nearly set his record player on fire. As a result the platter started spinning in slow motion for the rest of the party, turning Cumbia into a different affair altogether. The youngsters went crazy for it and started harassing the sonidero with requests to record cassettes for them. Reluctant at first, Dueñez finally began recording a series of pirated cassettes called "Rebajada" which included mainly Colombian cumbia and porro in slow-mo exclusively. Those tapes took the city by storm and turned rebajada into a celebrated and defiant movement of the youth.
Of course it would not be a Mexican urban legend if it didn`t include dramaturgical elements, and so for nearly 30 years, until this day and probably for ever, both cities have been arguing and claiming ownership the creation of rebajada for themselves. But sonidera Joyce Musicolor, who never has time for such trivial arguments, got straight to the point: "Rebajada, and the equipment to perform it, is from here [Mexico City] but it was Monterrey that popularised it."