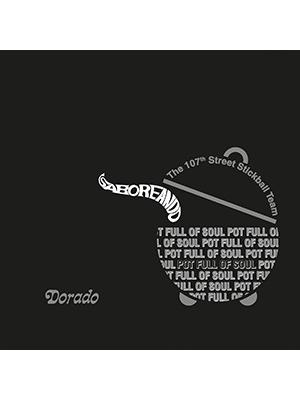 Reïssue of this rare latin soul album from The 107th Street Stickball Team titled "Saboreando - Pot Full Of Soul" with a mix of soul, boogaloo and funk. Originally released in 1969 with producer Bobby Marin. Re-released in 2018 by Everland Records.
In the late 1960s, producer and arranger Bobby Marin had the concept for an album based on the sounds and experiences of his youth in his Spanish Harlem neighborhood. Credited to the 107th Street Stickball Team, this LP was rehearsed and recorded on the same day, fusing Latin music with soul and a bit of pop and boogaloo. It`s a pretty fair mixture as far as such Nuyorican albums of the era go, with "On Old Broadway" fusing soul-pop with light Latin jazz and salsa; others, like the Spanish-language "Toma Guajira," getting into more straight salsa-jazz fusion along the lines of Willie Bobo; "Barbara with the Kooky Eyes" (great song title) going for an instrumental boogaloo; and other songs getting into more of an updated Latin/doo wop hybrid feel. The sound and grooves are pretty cool, One of the best songs, "On Old Broadway," has a chorus that virtually replicates the one from Petula Clark`s "Downtown" melodically.
Produced by Bobby Marin, engineer Jon Fausty.
SIDE 1:
1. On Old Broadway
2. Toma Guajira
3. Look To Me
4. You Put A Hurt In MY Heart
5. Rhythm and Soul
6. Mojo Shingaling
SIDE 2:
1. Barbara With The Kooky Eyes
2. Tell Her I Love Her
3. Let Me Do My Thing
4. Come Live With Me
5. Rose Marie With The Funny Knees
6. Hey Mama
7. Lost In The Jungle