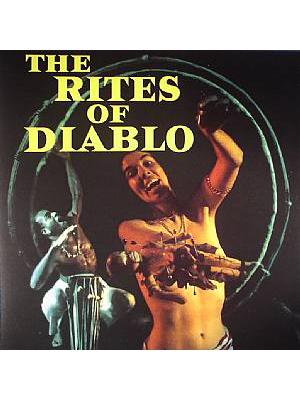 Label : So Far Out

Johnny Richards (November 2, 1911 - October 7, 1968) was a jazz arranger and composer in the mid-20th century United States. He was a pivotal arranger for some of the more adventurous, boisterous Stan Kenton big band performances on recordings in the 1950s: the Cuban Fire! suite being the most know of those compositions. Reïssue of 1958 LP.
Johnny Richards put together this lp after studying the rituals of the Bantu,the family of tribes which inhabits southern Africa. Intrigued by the rhythmic possibilities he composed the six part Rites of Diablo which has been described as a sort of Black Mass during which the participants vilify,insult and by every means possible degrade the gods of evil. Augmenting his regular orchestra with SEVEN percussionists,including Sabu Martinez ,Patato Valdez and Jose Mangual,brought in to to emulate the sounds of the authentic drums used in the genuine ritual,plus the eight voiced Dave Lambert Singers, Richards took over New Yorks Webster Hall for four sessions in march and april 1958. The flaring excitement of the band ,the superlative solo work of men such as Gene Quill, Seldon Powell and Jimmy Cleveland and the meshing of the huge percussion section gives the music a unique quality.
This is another great example of jazz exotica with a latin twist.