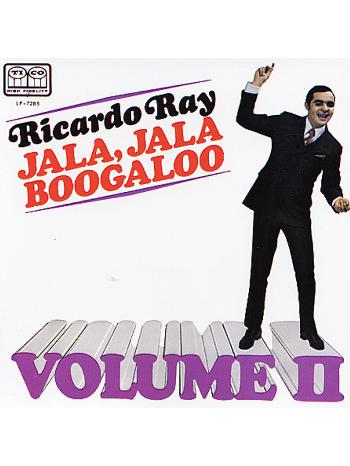 An amazing follow up to Ricardo Ray`s first album of Jala Jala and Boogaloo tracks – a real killer Latin soul set that`s even better than the first! The record`s got a full-on style that kicks in from the very first note – a blend of uptight Latin tracks and some very groovy 60s-styled numbers with plenty of sock-soul touches – a definite boogaloo influence, but still some strong Puerto Rican modes too. Lyrics are mostly in Spanish, but the grooves have a universal appeal that kicks in no matter what the language! Stormin and groovy all the way through.
Jala Jala Boogaloo Volume II is an album released by the salsa music duet Richie Ray & Bobby Cruz. Released in 1968, the album continues with the sound of its predecessor Jala Jala y Boogaloo, influenced by Latin rhythms such as the Puerto Rican Jala Jala, as well as by soul and Beat music.
Backed by the hit song "Mr. Trumpet Man", the album was an international success, being popular in the United States, Colombia, Puerto Rico and other countries. The album`s success enabled the duet to sign a contract with West Side Latino records, and leave Alegre Records.
Side A:
1. "Tin Marín" (4:32)
2. "Música Ye Ye" (3:29)
3. "Aquel día" (    5:07)
4. "Mr. Trumpet Man" (5:01)
Side B:
1. "Iqui con Iqui" (3:40)
2. "More Richie" (4:30)
3. "Que se rían" (3:43)
4. "Las Caraqueñas" (2:51)