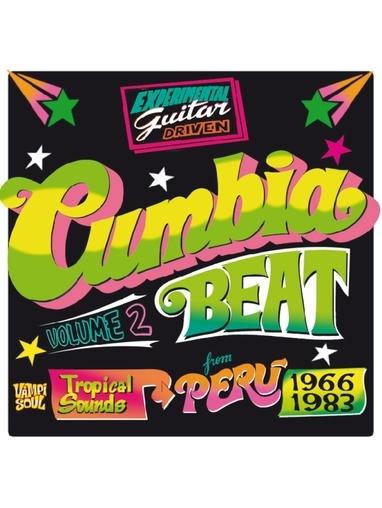 Experimental guitar driven CUMBIA BEAT vol.2: Tropical Sounds from Peru 1966-1983. (2-LP)
The "resurrection" of Peruvian tropical music, of psychedelic cumbia or, as others like to call it, chicha, is perhaps one of the most surprising musical phenomena in recent years. The number of reissues, new releases and bands that have begun to play chicha or covers of tropical Peruvian classics in Argentina, England, Russia and the United States has multiplied. This cocktail of electric guitars, Caribbean percussion, Andean pentatonics and psychedelic soloing, synths, moogs, gu?iros, wah wahs, timbales and fuzztones was simply too striking to go unnoticed. Elements of rock, folklore, música criolla, Andean music, Amazonian music, Colombian cumbia, salsa and even psychedelia intermingle in this "cannibal" genre capable of devouring and assimilating every possible influence.

Both Enrique Delgado and Manzanita, the two great founding guitarists of the genre, made music that absorbed all possible manner of styles. We feature not only tunes from Delgado with his group Los Destellos and from Manzanita but also from their side projects: Delgado`s Los Casmeños and Manzanita`s El Monje Loco. Los Girasoles, Los Yungas, Los Beta 5 and Los Ecos continued those sonic explorations. In the case of Los Girasoles, their great singer "El Chévere" Félix Martínez shows his tropical skills in `La bocina`. Although this compilation consists mostly of instrumentals, a classic of Peruvian tropical music, `Colegiala` by Los Ilusionistas, is included with vocals from Carlos Ramírez "Centeno". Los Beta 5 would never turn to the sung format. Their instrumentals represent the best of the first era of Peruvian tropical music: playful bouncy guitars, simple but charming riffs, tropicalizations of ballads and certain rock classics. Another group that has in their origins instrumental beat spirit and sound are Los Ecos. The sparkling clean guitar sound of their leader Beto Cuestas always shines in songs filled with a delicate pop sensibility and melodies that oscillate between melancholy and danceable experimentation.
Los Yungas had recorded songs in which música criolla and huayno are "cumbia-nized", but the more significant point of departure happened a year later when Los Demonios del Mantaro released a historic single with `La chichera` on one side and a tune called `Peti pan` on the other. Its composer, Carlos Baquerizo, decided to make music not with a great orchestra but with a small band consisting of a snare drum, a gu?iro, a sax, a clarinet and a harmonica. Baquerizo was also the first to introduce an electric guitar in Peruvian cumbia in Los 5 Palomillas, a side project of Los Demonios.
The influence of the "provincial sound" would be felt by many other guitarists, such as Tito de la Cruz, from Los Titanes; Aniceto Salazar; Pancho Acosta, from Compay Quinto; and Lener Muñoz, from Grupo Celeste. One of the most original and surprising guitar sounds in Peruvian tropical music would be that of Maximiliano Chávez from Los Orientales de Paramonga, who created a very peculiar style of tropical music with deep basses, galloping percussion and wah wah guitar.
But if there was a place with the biggest party and explosion of sounds, it was the Peruvian Amazon, where large cities and small towns were infected by the tropical virus. From that wide spectrum we have selected the two most influential groups. Los Mirlos, with their guitars and hypnotic grooves, achieved the most popular and transnational of the Amazonian sounds. The other Amazonian miracle was Juaneco y su Combo, led by Juan Wong. Their music, full of references to Amazonian mythology and to ayahuasca (a psychoactive drink), featured the guitar of Noé Fachín. Their sound emerges like a message from another world where the party is still going on and the pavement hasn`t covered the rainforest.