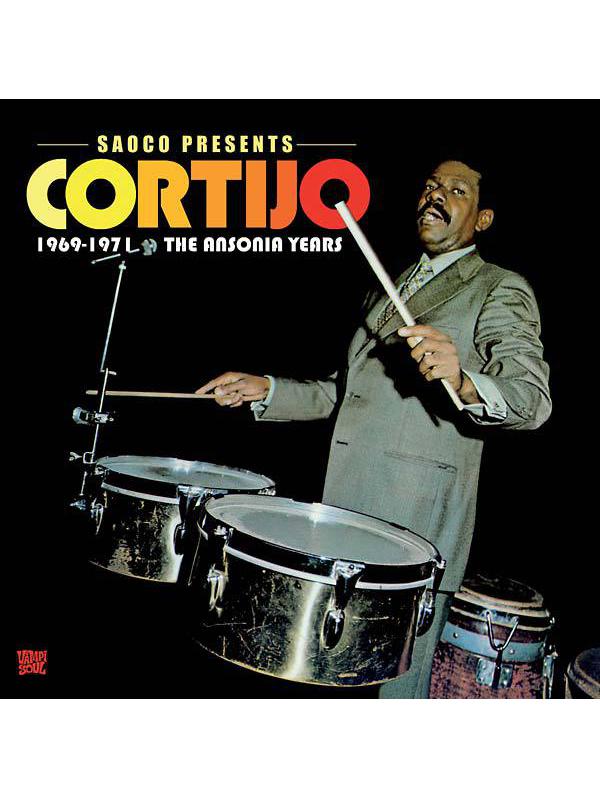 "The Ansonia Years" gathers the best recordings made by Rafael Cortijo, one of the major Puerto Rican figures of Latin music, for Ansonia Records during 1969 and 1971. Taken from the albums "Noche de temporal", "Ritmos y cantos callejeros" and "Volumen 2", he is accompanied by other key artists such as Chivirico Davila, Ismael Rivera, Francisco “Kako” Bastar, and Javier Vazquez took Afro-Puerto Rican traditions to the most prestigious Latin ballrooms of the period, making him the architect of an Afro-Caribbean and Puerto Rican salsa style, coming from the street corner but different from the New York tradition. He was a cultural hero who brought a host of dazzling nuances to his three recordings on the Ansonia label. Most tracks reissued for the first time.
Ook leverbaar op CD met zelfde tracklisting.
SIDE A:
1. Chiviriquiton
2. Echando Un Pie
3. Quien Fue El Primero?
4. Tele Tele Ya
5. La Madama
6. Alegria Bomba Es
7. Amanecer Borincano
8. Que Linda Te Ves
SIDE B:
1. Tu Y Tu Guarapo
2. Yo No Bailo Con Juana
3. A La Verdegue
4. Te Va A Gustar
5. El Negrito Bailador
6. Las Ingratitudes
7. Dorotea
8. Dudando

On 7 May 1970, Rafael Cortijo met a group of lifelong friends in New York City to embark on a musical journey back to his Afro-Caribbean roots. For the first time ever in a recording venture, the famous Puerto Rican percussionist and ambassador of bomba and plena music since the 50s decided to express the raw essence of his repertoire of island rhythms; stripping them of orchestration with the idea of recreating in the studio the drumming fiestas he enjoyed as a boy in the Santurce neighbourhood in San Juan de Puerto Rico. He was accompanied by fellow percussionist and partner on this production, Francisco “Kako” Bastar, as well as the singers Rafael “Chivirico” Dávila as lead vocalist and Ismael Rivera on the chorus, the outstanding artists of Latin music at that time, who had also grown up with Cortijo in the streets of San Juan.
The result of this legendary session was the album “Ritmos y cantos callejeros” by Cortijo and Kako y sus Tambores; an essential contribution to the sonorous vitality and sense of identity that preceded the salsa boom in New York and the Caribbean. While a new generation of immigrants of Latino origin, mostly Puerto Ricans, took their drums to Central Park and out onto the streets of the Bronx to make their way in New York, Cortijo and his friends chose to reclaim the immense wealth of their Puerto Rican drumming heritage, as well as the link between this legacy and popular music of the day. Considered today a “DA FUNK Afro Boricua Style” classic, in the words of New York producer Bobby Matos, this tribute album to traditional island rhythms is much more than an ethnomusicological document. Far from being a folklorist, Rafael Cortijo has always adopted a more pragmatic than orthodox approach and, on this album, as on all their bomba and plena recordings, Cortijo and Kako predominantly use Afro-Cuban percussion instruments (congas, timbales and bongos), which they considered more suitable than their Puerto Rican equivalents, traditional bomba barrels and plena panderos.
Together with the “Ritmos y cantos callejeros” album, between 1969 and 1971 Cortijo recorded another two LPs for the same label, Ansonia Records: “Noche de temporal” and “Volumen 2”. Both albums are along the same lines as the combo with which the maestro had made his name in the 50s. Spearheading the salsa movement in Puerto Rico, Cortijo y su Combo had revolutionised tropical dance music during this period; developing a distinctive sound, favouring spontaneous, authentic neighbourhood Caribbean rhythms, in contrast to the growing sophistication of Latin orchestras. Dominated by percussion and voices, Cortijo’s combo conveyed the impetuous energy of a carnival group, which was very different from the routine formality of a tropical big band. A strong advocate of bomba and plena throughout his thirty-year career,
Cortijo also stands out for his explorations of the ramifications and symbiosis of West Indian rhythmic diversity, emphasizing the dialogue between Puerto Rican and Cuban styles. His two combo productions for Ansonia are particularly interesting in this respect, with the outstanding participation of the Cuban musician Javier Vázquez, first known as the pianist for Sonora Matancera, and then as one of the leading arrangers for the salsa produced in New York in the 70s.