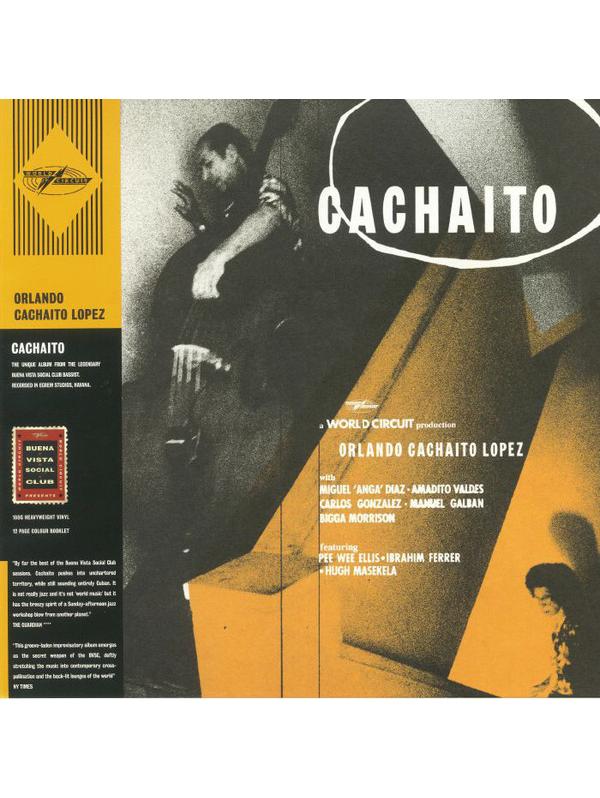 SIDE A:
1. Siempre con Swing (Intro)
2. Redencion
3. Mis Dos Pequeñas
4. A Gozar el Tumbao
5. Cachaito in Laboratory
6. Tumbao No. 5 (para Charlie Mingus)
SIDE B:
1. Conversacion
2. Tumbanga
3. Oracion Lucumi
4. Wahira
5. Anais
6. La Negra
Buena Vista Club mainstay Orlando "Cachaito" Lopez, who is widely regarded as the best bassist in Cuba, could have taken the safe route and recorded a straightforward collection of Cuban son/Latin jazz music. The resulting album may have been a bit predictable and mild, but the high level of musicianship would have ensured a quality product, particularly considering the impressive international cast that appears with Cachaito on this album. To their credit, however, Cachaito and his colleagues were willing to take some chances. Some tracks approach a Cuban version of dub music, as Jamaican organist Bigga Morrison`s Hammond prods or Cuban surf guitarist Manuel Galban`s instrument reverberates while the bottom drops in and out of the mix. French DJ Dee Nasty even scratches on "Cachaito in Laboratory," a partially successful experiment that yields interesting results even though it doesn`t quite gel with the rest of the album. At times the tracks seem more like studio jams than fully realized songs, but the album`s overall feel -- self-assured, relaxed, warm, even somewhat jocular -- is quite appealing. The musicianship, of course, is impeccable, including the amazing rhythm section of Cachaito, Miguel "Anga" Diaz on congas, Amadiot Valdes on timbales, and Carols Gonzalez on bongos. Other highlights include Ibrahim Ferrer`s cameo appearance on "Wahira," the album`s only vocal track; the full orchestral string arrangements by Demetrio Muniz and horn arrangements by James Brown saxophonist Pee Wee Ellis; and "Tumbao No. 5 (Para Charlie Mingus)," which was inspired by the Mingus classic "Haitian Fight Song."