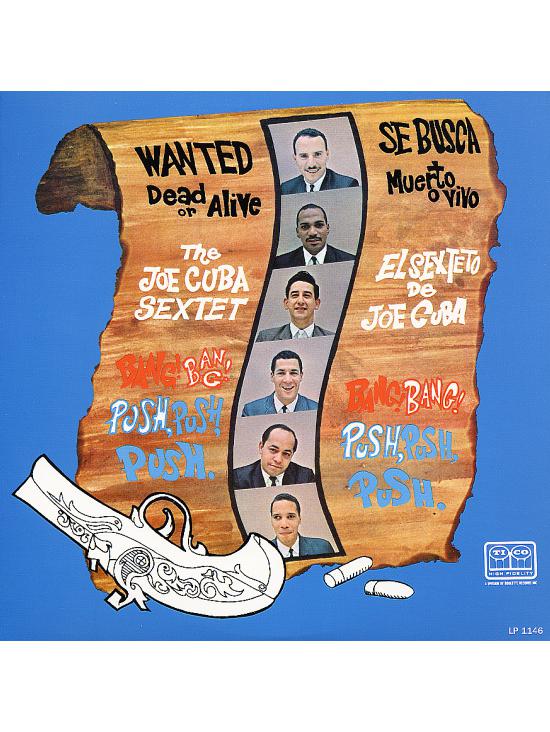 Wanted Dead or Alive (Bang! Bang! Push Push Push) 1966 Tico Records
Latin boogaloo classic from the word "bang"! This 1966 album was the one that busted Joe Cuba out of the Latin ghetto – into the sound of 60s soul, early funk, and beyond. The record`s a stone winner – filled with boogaloo tracks delivered by Joe`s firey young sextet, a killer ensemble that was setting the Latin world on its ear at the time. The title track – "Bang Bang" – is one of those tracks that you`ll recognize from a million references, but which never sounds as good as it does on this impeccable version from Joe. The whole album follows in a similar suit – blending Latin, jazz, and soul with effortless ease – shifting between English and Spanish lyrics in a genre-busting style that really captures all the freshness of the era.
The leading proponent of Latin Soul and Boogaloo, Joe Cuba, had a massive hit on his hands with the single Bang Bang . This album is perhaps the best seller of the genre and took Joe into the spotlight. The entire album cooks with a blend of R & B fused Latin Soul, Boogaloo and Salsa influenced sounds. A true classic that can be easily be categorized as a feel good record that is capable of lifting spirits and moving feet to the beat. A must-have from a very innovative era when Spanish and English were used interchangeably in lyrics and non-Spanish speaking fans danced the night away to the Latin beat.
Side A:
1. Bang Bang (4:04)
2. Mujer Divina (4:32)
3. Oh Yeah (3:20)
4. La Malanga Brava (3:05)
5. Que Son Uno (4:15)
6. Sock It To Me (2:20)
Side B:
1. Asi Soy (3:04)
2. Triste (2:27)
3. Alafia (3:25)
4. Push, Push, Push (2:15)
5. Cocinando (9:00)