Specialist in all Styles - Orchestra Baobab 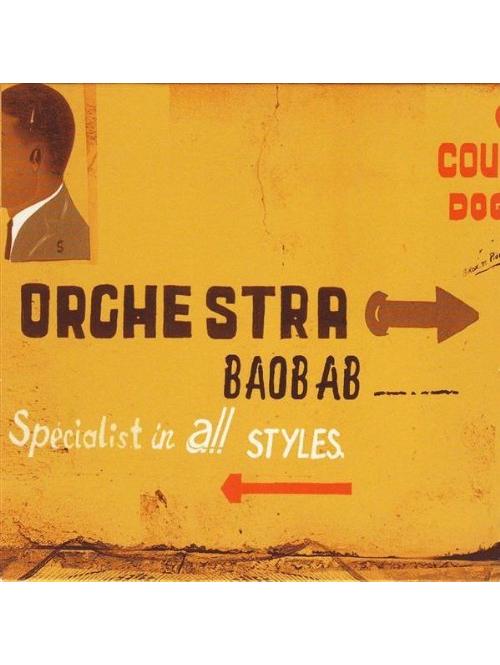 Titel : Specialist in all Styles

€ 14,90
Bestellen Tell a friend
Orchestra Baobab - Specialist in All Styles (2002)
Senegalese Orchestra Baobab was among the foremost practitioners of the Afro-Cuban style that became popular in it`s part of the world in the 1970s. Years later, when more electric, rock/pop-influenced music took over Africa, the group disbanded after an unsuccessful attempt at updating their sound. It would oversimplify things to say that the success of their 2001 reunion made these comeback kings seem like Senegal`s answer to the Buena Vista Social Club, but it`s also hard to deny. Sounding fully invigorated on their reunion album, SPECIALIST IN ALL STYLES, Orchestra Baobab proudly displays the old-school musical values that made them so popular 30 years earlier. The African guitar patterns and vocal lines intersect perfectly with the Cuba-inspired percussion and song structures for a sound that`s alternately mellow and busily percolating. Ironically, the album was co-produced by Youssou N`Dour, whose mbalax sound unintentionally helped unseat the Orchestra to begin with, but N`Dour is a longtime admirer, and his passion for the group`s music is obvious in the loving care given to reproducing their unique sound on SPECIALIST IN ALL STYLES.
The band revives great older Baobab songs like "On Verra Ca" and "Ndongoy Daara," brings in a few folk tunes, and rounds out the album with strong new material. "Homage A Tonton Ferrer" is a rollicking vocal tour de force featuring Cuba`s Ibrahim Ferrer and N`Dour. Moreover, the band is tight throughout, with fantastic solos coming from guitarist Barthelemy Attisso and saxophonist Issa Cissoko.
1. Bul Ma Miin (6:02)
2. Sutukun (5:32)
3. Dee Moo Woor (4:18)
4. Jin Ma Jin Ma (6:06)
5. Ndongoy Daara (5:21)
6. On Verra Ca (5:00)
7. Hommage A Tonton Ferrer (5:54)
8. El Son Te Llama (5:29)
9. Gnawoe (6:21)
Putting a classic band together 15 years after their demise can be a recipe for disaster. In this case, though, World Circuit head Nick Gold has definitely done the world a favor. Orchestra Baobab might be best known for their classic Pirate`s Choice, but this disc is every bit the equal -- it`s most certainly not Buena Vista Baobab Club. For someone who hadn`t touched a guitar in years, after becoming a lawyer in his native Togo, Barthelemy Attisso is all over this record, offering beautiful, inventive solos and playing whose fluidity, especially on "Gnawe" and "Dee Moo Wor," is wonderfully atmospheric. As any fan would expect, the Cuban influence remains very strong, but the Wolf roots are also strong, especially in the voice of young singer Assane Mboup. Guest turns from Ibrahim Ferrer and co-producer Youssou N`Dour on "Homage a Tonton Ferrer" -- a remake of "Utru Horas," their biggest song -- aren`t going to hurt the album`s visibility. But ultimately it`s the band themselves who carry the record, playing better than ever (not only the superb Attisso, but also saxman Issa Cissokho). Back in fine style, indeed.